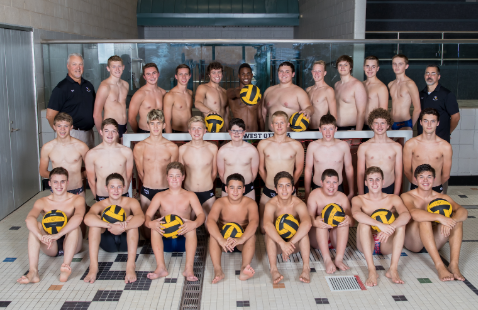 “In!” Joe Dummer says, a slightly indignant look on his face.

“One!” responds the group of 12 high school boys as they slowly climb out of the water. This is what the boys water polo team calls “up-and-outs,” or jumping in the pool and then immediately pulling themselves out without using the ladder or pushing off the bottom. It is a common punishment when the team isn’t listening or executing the drill right.

This kind of punishment reflects Dummer’s coaching style. He has coached the team to a better season than they have had in the past three years, finishing with a 9-5 record. For the players, it is the third year coach that has made the biggest difference. “Joe’s mottos and no-nonsense coaching style has really helped the team and myself stay focused and do our best,” Jr. Greyson Goodemoot said.

For Dummer, it’s his life experiences that have influenced his coaching style the most. Dummer was in the United States Navy from 1989 to 1997, serving as an active duty officer for four years. He joined to follow in his father and grandfather’s footsteps and to help him get through college. He often applies  experiences he had in the military to how he motivates and coaches the water polo team.

“The biggest thing is being organized, a big part of being successful in the military is being organized,” says Dummer. The same goes for water polo. Every day the team starts with the same warm up, followed by a drill focused on what Dummer thinks they could improve on the most, and finishes with a short scrimmage if there is time. Organization, for Dummer, is the start of a successful practice. He doesn’t tolerate wasted time and certainly doesn’t like low effort, mentioning to the team every day to “Clear the mind, do the work, and get better.”

Dummer also puts a big emphasis on simulating game situations, something he also learned from his time in the military.  “In the military… you have your mission and you try to train on all the aspects of the missions that if it occurs in real life, you’re ready.” Dummer said,. “I try to run the team through the situations we would see in the water, so we can know how to react.” These kinds of drills have been the difference for the team.  They have finished with a 4-4 conference record, something West Ottawa hasn’t done in 4 years.

Above all, Dummer emphasizes a strong focus. Nobody on the team gets away with not doing his best or being distracted. By keeping the team focused, they can continue to get better and improve every practice. This focus is something that Dummer has elevated at West Ottawa. “The level of focus he requires from us when we practice has helped the team work better together because we know he expects us to do our best all of the time,” Jr. Kyle Langdon said.

Dummer clarified that he has fun with his team as well. “I don’t get into someone’s face if the screw up and chew them out like you see in the movies.  I never saw that as an effective means of motivation or leading.”

Instead, Dummer keeps the team concentrated and working hard without having the players fear him. “I try not to be a best friend because there will be a time you have to yell at someone and tell them something bad, but I like to think I still have a relationship with the guys on the team.”

This middle ground has been what fostered success for the team. Jerry Aguillon says, “You know he cares about us but he also is going do what he has to do to win.” Dummer’s coaching style has led to a much more successful season for the team, a season that was worth the up-and-outs.