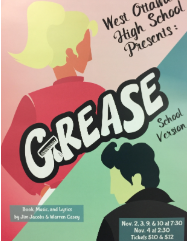 An exhausted Soph. Izzy Balbuena had just spent a grueling three and a half hours rehearsing for the school musical that was fast approaching. She is a member of the ensemble for the musical Grease, in which she performs in 10 music numbers including the timeless, “You’re the One That I Want.”

The musical is based on the well known 1978 high school movie musical, based in the 50s, Grease. There are 24 musical numbers in the original movie, and the West Ottawa High School cast with the leads of Danny Zuko played by Miles Kent and Sandy Dumbrowski played by Grace Bruins create a rendition that is sure to grab the attention of all audience members.

This year’s musical is blowing people away, involving onstage costume changes in 12 counts and six set changes, all of which seemed to go smoothly from an audience perspective. That success is due to the cast and crew’s hard work over the past few months.

“Tessa Schultz, the set manager, stayed until 6am one night working on the set and got an hour and a half of sleep and then went back to work on the set that morning,” Sr. Clara Klein said. She helps works on set painting and props.

“You do the same things constantly, the tediousness wears down on you; for three hours you’re working on the same thing over and over again,” Miles Kent noted.

“Even though it takes a lot of work to put on the show, I am so excited to be doing it next weekend. It will take up much of my time this week, and I will have a lot of homework on Sunday but it is worth it to get to be a part of this awesome show,” Sr. Maggie O’Brien, a member of the ensemble said. The Holland community loves the musical; it was a sold-out performance on Sunday, November 4.

However, Balbuena had one thing to say about the cast: “We are like family.” The audience will definitely pick up on this astounding bond during their performance.

“My favorite part of [my experience] with the musical is warming up together, starting together and ending together,” Balbuena said.

To see Balbuena, Kent, O’Brien, Klein and the rest of the amazing cast and crew of Grease, check them out at either of these upcoming performances: November 9, and 10 at 7:30 in the West Ottawa Performing Arts Center at Harbor Lights Middle School. Tickets cost only $10-$12 and are going fast so get them soon!