A Project for Better Journalism chapter
The West Ottawan
Entertainment 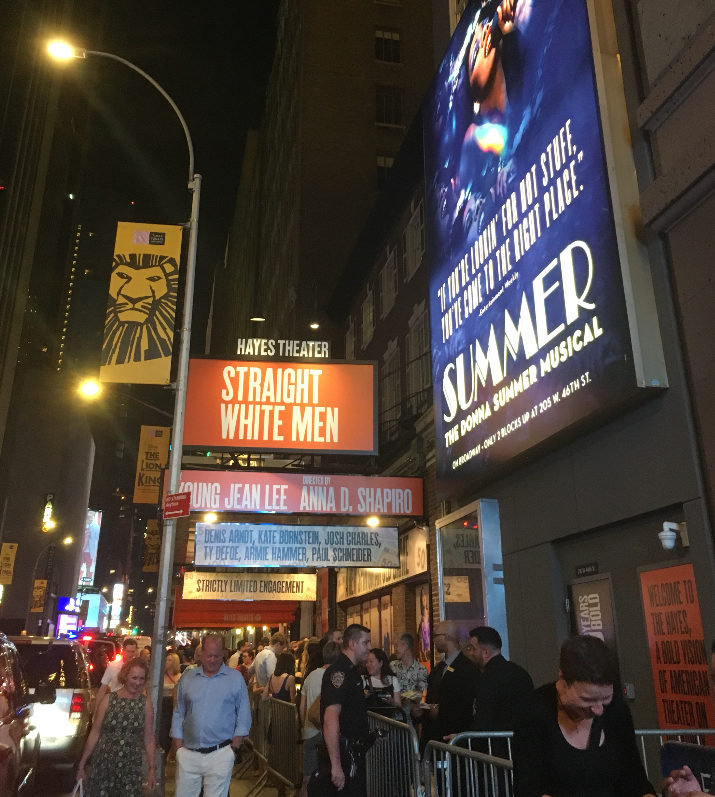 It was a rainy night coming home from the movies, and  I could not stop thinking about Call Me By Your Name. The setting, the themes, the acting—it was all amazing. I wanted to know more about the actors and how they were so captivating. I followed all their Instagrams and kept up with celebrity news. It was the first time I was really excited about celebrities.

So, when I found out that Armie Hammer, one of my newfound favorite actors, would be on Broadway I HAD to get tickets. My family was already planning a visit to New York, and since the play “Straight White Men” was being previewed on Broadway the week we were going, it seemed like the perfect opportunity to see Armie Hammer acting in real life.

I had never been to a New York City Broadway performance before and wasn’t at all familiar with how stage door signings work. I imagined it as a small area outside of the theater where maybe one or two other people were calmly getting their playbills signed and taking pictures with the cast. I was wrong.

Leading up to the show, my sisters and I brainstormed what to say and what to get signed, deciding on either a book, a new tote bag, or a journal. After some serious consideration, I went with the book.

A day before the show, my family and I went out to get pizza in Times Square. As we were walking down Broadway after dinner, we noticed a growing crowd of people in the distance. Why are there so many people…what’s going on?

As it turned out, the stage door experience isn’t as intimate and calm as we had expected.

“Keep walking! Off the sidewalk, c’mon!” yelled the security guards, ushering us and the other passersby away. There was about 50 people stuffed shoulder to shoulder, toe to heel, in a tiny barricaded area around the theater. People young and old were chatting in anticipation, holding their playbills, books, and cameras.

We paced in front of the theater, trying to stay lowkey. This was our opportunity to scope out the stage door experience. It was the first signing for “Straight White Men,” so we lurked on the sidewalk in front of the stage door, hoping to see the cast. Others started to gather around the theater too, waiting across the street and on the curb, attempting to get a glimpse of the celebrities.

Every time the stage door opened, a rush of adrenaline struck the crowd. It was chaotic, but invigorating. When the cast finally came out, we ran to the barriers, snapping photos and jumping on our tiptoes to get the best view. We were pumped and ready for the next night.

Going into the performance, we formed a plan: as soon as the curtain began to close, we’d run outside to get a good spot right in front of the stage door. The play was hilarious and upbeat. It was interesting to see Hammer acting in real life after watching him act on screen in the movies.

As planned, my sisters and I dashed out of the theater when the curtain dropped, followed by many others who were also eager to meet the actors. We managed to get a good spot right up front; we were squished, but couldn’t have been more excited.

The anticipation rose with every small movement of the door. Suddenly–screams–the door opened for real, revealing the cast.

Fans were yelling out questions and compliments, holding their Call Me By Your Name books and crumpled playbills, just hoping to get them signed and possibly get a quick selfie. We got our playbills signed by the whole cast; It was interesting to meet the lesser-known actors as well. As Hammer approached us we held out our books and tried to think of something to say, all while discretely videotaping the whole thing.

“Congrats on your Broadway debut!” I managed to blurt out while he was signing my book. He responded with a warm, “Thank you very much!”

Even though we didn’t get as much of an opportunity to take pictures and interact as we had initially thought, it was a very memorable moment. My sisters and I got the chance to meet one of our favorite actors, and that was special.

As we were walking home with giddy happiness, we struck up a conversation with one of Hammer’s super-fans. He told us that he planned to go to the stage door every day for two weeks. He spent all of his money on tickets for the show and waited around the theater during his free time in hopes of meeting Hammer. This type of dedication is not uncommon among fans. They crave attention from those who inspire them, thus trying to form a relationship at meet and greets and signings.

For me, just having the opportunity to interact with a favorite celebrity is amazing. It may seem silly to care so much about meeting a celebrity, but it gave me a new perspective: there’s a human behind the movie characters, paparazzi pictures, and social media posts. I feel a more personal connection to the celebrity and his work; it’s inspiring to meet someone that held such an influence over my favorite movie.