Erica Francis: From WOBN to FOX 17 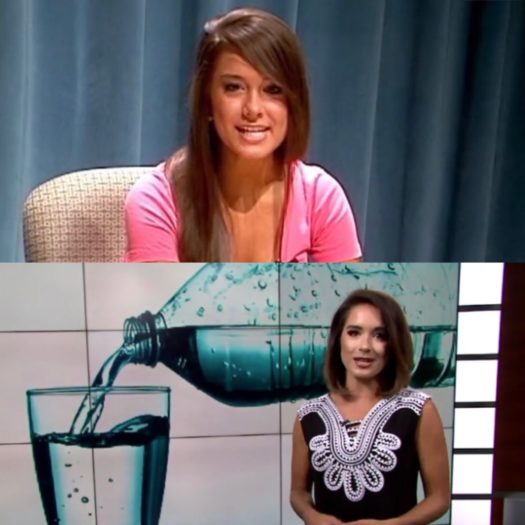 In 2011 Erica Francis sits cross-legged in front of the camera in the WOBN studio reporting about Vocalaires auditions and giving information on club meetings. She speaks smoothly and entertains the audience with her bubbly personality; it is evident she is comfortable in front of the camera.

While everyone could tell she was talented at reporting, she was equally good at everything she participated in, so her future may not have been obvious to her classmates.

Though others may not have known it, reporting was her passion. There was no question for Francis this is what she would spend the rest of her life doing.

Years later, Francis has made her dream a reality. Every weekday, she reports for Fox 17 news. She’s pursuing her passion, and it’s evident in the quality of her work.

Performing has always come naturally to Francis. From a young age, she was involved in anything that would get her on a stage. Whether it was singing in a choir or acting in a play, performing gave her a rush.

In her sophomore yearl, she decided to sign up for West Ottawa’s broadcast journalism class. After only a short time as an anchor for WOBN, Francis found her calling; not only did she love reporting, but she was good at it too. “I thought it was so compelling telling other people’s stories and informing others of what was going on in the community. Plus, it gave me the chance to be creative.”

After finding her dream career, Francis got busy applying to schools that specialized in her major.

She made the decision to attend Central Michigan University (CMU), which has one of the best broadcasting programs in the country. Francis ultimately chose CMU because it offered the real world experience essential to succeeding in broadcasting. “I knew I had to have real-world experience to make it in the real world and I knew Central would give me that opportunity.”

Starting her freshman year at CMU, Francis immersed herself into the broadcasting community and found any opportunity she could to begin networking. She may have been a freshman, but that didn’t stop her from getting involved and going after what she wanted. She joined the Alliance for Women in Media, and was reminded this was the career for her. “(It) helped me realize that this is really, truly what I wanted to do with my life.”

She decided to take a risk and try out for CMU’s News Central 34. “Though it was nerve-racking, I knew I had to get involved with more.” As a freshman, it would be difficult to make the cut, but she gave it a try. Fortunately, Francis landed a position as backup anchor. While it may not have been the top position, it was a start.

Throughout college she continued to make connections and gain experience. She stayed involved in News Central and constantly worked toward her goals.

Up to this point, life had been going pretty smoothly; she had a dream, she found the perfect school, and she was getting opportunity after opportunity. But no dreams come easy, and every story has its ups and downs.

Some semesters, no matter how hard she worked, she just didn’t get an anchor position. In these challenging times she began to doubt herself and her dream. “I thought I wasn’t good enough and wanted to give up.”

Luckily, with a little help from her mom and Lee Ann Womack’s song “I Hope You Dance,” she persevered. “Sounds corny, but my mom sent it to me one day saying some things don’t always go the way we want in life, but we have to keep pushing. Thank God I did.”

Not only did the hardship help her grow a thicker skin, something essential in the broadcasting business, but it also made her work even harder than before.

She landed internships with Holland TV, Fox 2 News, HOMTV, and even a marketing firm in Detroit. She also became a sports reporter on campus. She gained experience, and her resume was well-rounded. Francis put herself in a position to succeed, and that’s exactly what she did.

Her big break came while attending a conference in her senior year of college. She met a former Fox 17 reporter, who ended up being the connection she needed to land the job she had been working so hard for. Soon after, she got a call from the director at Fox 17, and the rest was history.

Today, Francis gets to wake up every day and go to the job she spent years dreaming of. While she finally made it, she will never forget all she had to go through to get here. On her desk, she still has her favorite quote posted as a daily reminder: “Dreams don’t work unless you do.”

To other young people trying to achieve a dream that may seem out of reach, Francis has some advice: “People are going to tell you ‘you’re not good enough’ in life, brush it off. Stay focused, work hard and get involved!!! Be creative, have fun, but not too much. Another important tip: grow from your mistakes! Nobody is perfect, even on TV. Strong people learn from their mistakes and don’t dwell over them. Lastly, find something you love and the rest will come easy.”

As for the future? “I’m not sure where life will take me, but I’m excited. Stay tuned…”

Who knows where life will lead for Francis, but with her work ethic and passion, the possibilities are endless.