“I’m doing this for them” 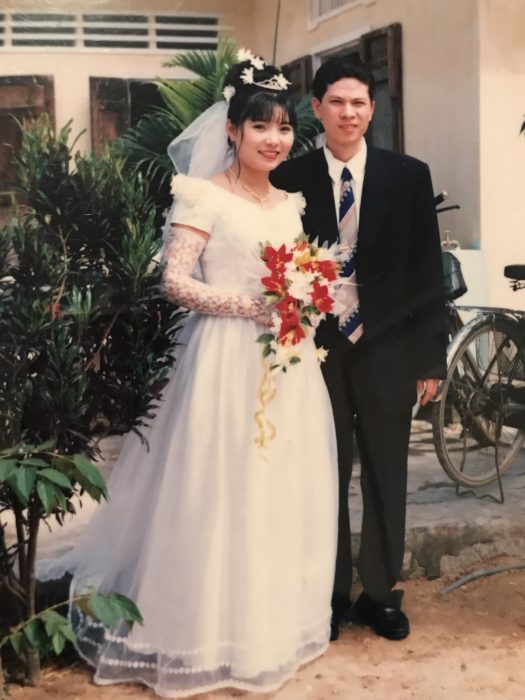 I watched as my mom and grandma tearfully held each other; an ocean had separated the two of them for more than ten years. I remembered my grandmother’s apologies to her daughter, for leaving her alone and for not realizing what a difficult life she had been living. Until then, I had never seen my own mother cry, but like a dam had burst, they could not stop sobbing. The American Dream, the idea that every U.S. citizen would have an equal opportunity to achieve success through hard work, determination, and initiative, was only that: a ‘dream.’ Life in America was not as glorious as the people in Vietnam thought.

Life for my mother before America was hard. She lived in poverty, and the only light she had was from the moon or the sun. On nights with full moons, she and her two sisters and brother would go outside to celebrate. She was completely dependant on the bright moonlight for life. Without the moon, her nights would pass by in complete darkness.

My mom grew up having very few possessions. Money and food were scarce. Even with the bright light of the moon, her future looked dim. She was fortunate enough to graduate high school, but she would not have the chance to pursue the higher level of education she wanted. As the oldest of her three siblings, she would have to go to work right away. Her dreams of wanting to be a teacher were simply unrealistic, and she would have to accept that. She was a beautiful young woman with so much promise, but the odds were stacked against her.

My mom was only my age, 17, when my grandparents decided to marry her to someone in America. My grandparents had found someone, my father, who would take my mother to the land of freedom, wealth, and opportunity. My parents sent each other a few letters and within a year, their marriage was official. Even though the two of them had never had a face to face conversation, they both took the risk in their marriage. They did not have the chance to fall in love or get to know each other better. The truth was my dad had plenty of suitors mailing letters to him. Many other families were pushing him to marry their own daughter.

Destiny spoke and my dad chose my mother (later on I found out he chose mom just because he thought she was the prettiest, but this is supposed to be touching, so I’ll just pretend I don’t know that). As a result, my mom was immediately sent to America with only the clothes on her back, completely relying on a mystery man she didn’t love yet. She didn’t know whether her new husband would treat her well, or if the two of them would get along. The experience was absolutely terrifying, and life threw her right into the eye of the hurricane. Going to America would mean leaving her family and the youth of her twenties behind. Her future was uncertain, and she did not know whether America would be as promising as everyone believed.

After marriage, my mom went job hunting. All the places she went turned her down because she did not speak English. Eventually, she was able to snag a job because a friend of my dad’s convinced his supervisor to let her in. She worked in a factory that was predominantly immigrants. There she received verbal abuse from her peers. The only people that she could understand would call her names and sneer behind her back. She was such a young thing, they would say. The age gap between my parents, a whole ten years, was looked down upon. In the eyes of other people, she had been sold off to a random man to give her family back home a better life. Life was harsh to her. Everyone in Vietnam expected my mom to send money back home even though she could hardly support herself. She kept the specifics of her hard life to herself and shouldered the burden. She was the lifeline of the family.

When my mom arrived in America in 2000, her goal was to bring over the rest of her family. For her, coming to America was easy. She got married and received a green card. In reality, though, the rest of her family couldn’t get married like she did. To complete the necessary paperwork, she would need to a be a U.S citizen. Most people have to wait five years before they can take the naturalization test, but because she was married to my dad who was already a U.S citizen, she would only have to wait three years. She studied English and passed the naturalization test. The paperwork to bring my grandparents would take another year. In total, the process should have taken about four years, but certain circumstances would delay the process by another ten years. My grandparents were finally able to come to America in 2014. During those 14 years without her parents, my mom was expected to care for two children on her own. She jumped between factories until she found one that treated her better. She worked endless hours, and tons of overtime in order to take care of me and my brother, while still sending money to Vietnam.

My mom was selfless and giving. She never spoke out against my grandma, even when she would get angry at her for not sending money over. Life in America was weary and tiring, but she worked hard because she knew it would pay off.

When my grandparents came to America in 2014, they also found factory jobs. My grandma came home from her first day at the factory and she apologized to my mother. They both broke down, my grandma realizing life wasn’t glamorous, and my mom finally having her hardships acknowledged. My grandma asked my mom why she continued to live in America despite the hardships. If my mom had chosen to live in Vietnam, she might not have been a teacher, but she surely would have had a job better than a factory worker. She would still have her friends and her family. The memory of her trying to smile through her tears was very clear to me. She looked at me and my brother before turning back to my grandma, “I’m doing this for them.”

From then on, the thirteen year old me realized the importance of appreciating the things I had, the importance of working hard, and the importance of sheer determination. Nothing stopped my mother from giving up and returning back to Vietnam. She could have easily complained to my grandma and told the truth about what a difficult life she was living, but instead, she chose to persevere. After years of labor, my mother today owns her own home and has a fridge stocked with food. She has a loving husband and two great children. To me, my mom’s sacrifice means the world. Because of her, I have much more than I could ever ask for. I will never go hungry. I am free to pursue a higher level of education. I can choose who I want to love. Because of her, I will have the opportunities she always deserved.