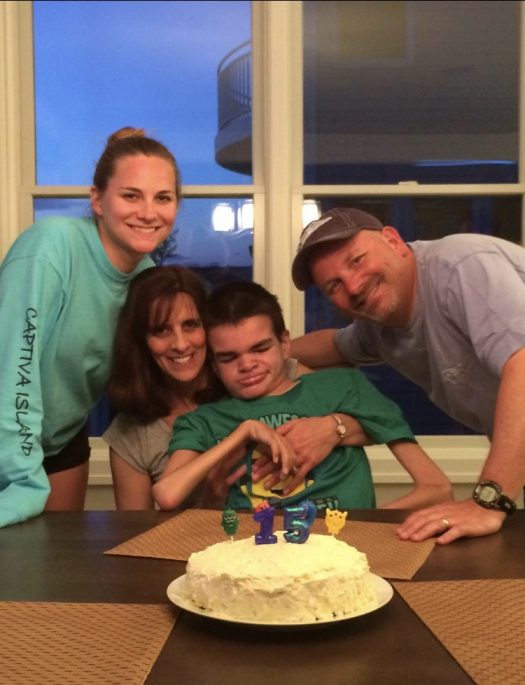 MPS can fall into 8 different categories with many different specifications in each category. There is about a 1 in 100,000 chance that a child would be born with MPS and some types are much rarer than others. Children with MPS usually have normal growth and development until about ages 2-6. Around then, visible learning declines and physical delays in development are noticeable. Most children live into their teenage years, but some pass away at an earlier age.

But to me, none of those facts or statistics matter. To me, Austin, my Austin, is the most incredible person I’ve known.

Austin is my cousin who is 15 years old. He has MPS. I am only one year older than him, and when we were younger, I claimed the position of being his personal caretaker whenever I was with him.

I knew that he had something that made him special because I had always been told that, but I didn’t understand. I was too young to understand something without being able to see it. And I couldn’t. He didn’t look different to me. Now anyone who sees him can see. But I don’t think they can understand.

When I see my Austin, I see the sweetest face and the biggest brown eyes. I remember helping him pick up Cheerios and moving the straw in his cup so he could drink. But he can’t eat food anymore.

I remember repeating my name in the slow, sound-it-out tone that you would use when you’re trying to make a baby say a new word. I said it over and over until he repeated it back to me, but I was the one with the big smile on my face when he said it out loud. To me, it meant I was special to him. But he can’t say my name anymore.

All of those things sound sad, but that’s because people can’t understand.

There is only one way someone can understand Austin, our Austin, the brother, the son, the cousin, the nephew, the grandson, the friend. The only way anyone can understand him is after they hear one thing: his laugh. The opened mouth, widespread smile, room-filling laugh. When you hear his laugh, it is unforgettable.

Children with MPS can be labeled and grouped together by so many things, but his laugh could never be repeated. When you can understand and hear his laugh, your life can’t go on being the same. It’s a feeling that can’t be described. Hearing it once is like joining a club, a club full of so many people his life touched by his laugh.