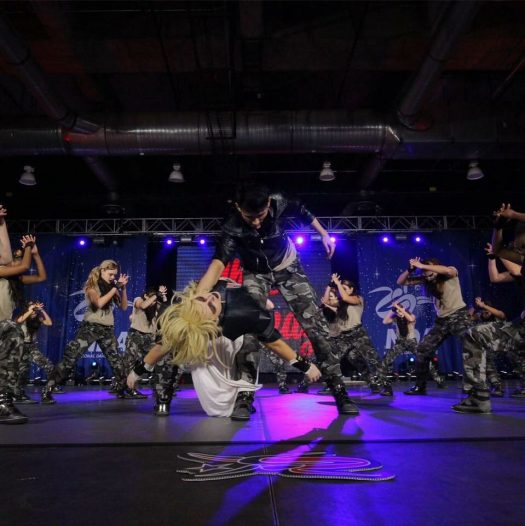 On day one of the biggest dance competition of their lives, Nick Ybarra and his crew of all girls were standing behind the stage at the 2017-2018 World Finals in Disney world.

“I can tell everyone is nervous” Ybarra said, “but I was just as scared as everyone else” he also said. With Ybarra being the only male on the team, he told himself “alright Nick you got to lead the team and relax everyone, get everyone ready”.

Five minutes were up and everyone was getting into position on stage. All he could think about was getting into character for the theme of the performance, which was Mad Max. As they waited, Ybarra said to himself “Lets do it! Lets kill this performance one last time”.

As the dance was going on and everyone was hitting each move at the perfect time, it began to get up to the point where he had to do a highly difficult power set, (flare-swipe-stap-swipe-barrel mills). “Leading up to this point I have messed up that combo many times” Ybarra said , so his main focus was to hit it. “The part comes up and Ihit my first move then the next and the next…” “I can hear my coach screaming for me. And at that moment I was thinking like damn! I’m hitting the combo!” Ybarra said.

The routine was coming to an end and he kept thinking to himself like “push, push yourself Nick” he would yell to his team “KEEP GOING!”. The song came to an end “I just took a big take of air in and I said to my crew…” “ We did it!” Ybarra said.

“When our performance was over I could see the crowd going wild” Ybarra said. Ybarra and his team walked backed stage and received many hugs and kisses from his family, friends and coaches. “We placed fourth and a lot of the other teammates were sad because we placed fourth, but others were excited because that’s the highest the studio ever placed the first time” Ybarra said. Although they got forth place and wanted to get placed higher, it was still an incredible moment for them that day for Ybarra and his crew. “I was excited and sad at the same time. I saw my teammates some were crying of sadness and some of joy” Ybarra said.

Although they wanted to be placed in the top two of the world finals, Ybarra and his teammates ended off their last competition of the season with a success, getting the highest placed team in there studio.